Have you ever wondered how soft plays are regulated to be as safe and clean as possible? 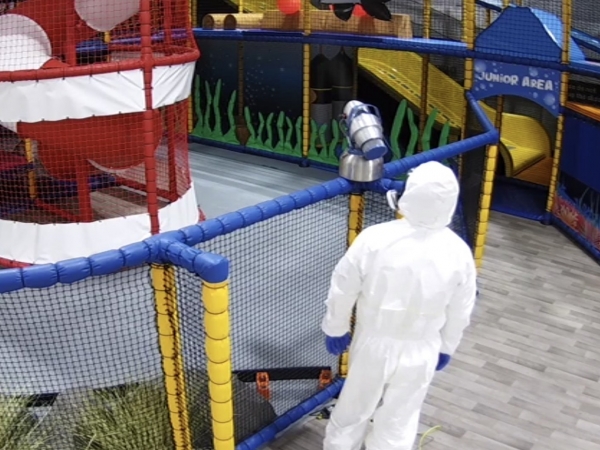 29th April 2020
Have you ever wondered how soft plays are regulated to be as safe and clean as possible?

In short, the answer is that they aren’t. There is a voluntary code called BSEN 1176:2008 that a number of soft plays adhere to, but the key problem is that it is voluntary. Of course, like any business, soft plays need to keep records and carry out regular tests on electrics, gas, lifting and fire equipment but there are no detailed requirements for the play equipment itself.

Now this isn’t much of an issue in the UK with British manufacturers as we didn’t find a single manufacturer that didn’t comply with the standards on the design and installation of the equipment when setting up Ocean Adventurers, but when you have a voluntary health & safety standard in an industry such as soft play there are always going to be some soft play operators that do not comply with it on an ongoing operational basis.

Take drop slides for instance, which are defined as a slide with a vertical drop that then turns horizontal. These slides should be manned at all times by an appropriately trained staff member according to the standard. But if you can recall an example of what we’re talking about when we say drop slide then you might struggle to recollect any staff member in a supervising capacity in the same memory.

The Royal Society for the Prevention of Accidents (ROSPA) provides some really useful guidance to soft play operators (http://bit.ly/38MhJms) on best practice that is largely taken from BSEN 1176:2008 and also offers consultancy services and inspections to soft play operators to audit whether they are meeting the requirements of this standard. We found the guidance on their website really useful when setting up Ocean Adventurers.

The standard recommends two key checks to take place on the structure – the daily inspection and the annual inspection. The first is carried out by a competent staff member and the second requires a much more in depth knowledge. At Ocean Adventurers we have daily, weekly and six-monthly checks of the structure to make sure it is as safe as possible. We also outsource the six-monthly checks to an independent company to make sure that these checks are as comprehensive as possible; our last inspection was in December 2019.

But as useful a standard as it is, it can be a little light on guidance in certain areas of which one is most definitely cleaning. With recent examples of vermin being found in ball pits this should be a far higher priority.

Let us be clear here - soft play structures are really hard to keep clean, especially as thousands of meters of twine rope is tied around padding in our structure, creating small recesses that are really hard to keep clean. This is not too dissimilar to other structures as soft play design in the UK is pretty standard. It can also be hard to reach all ‘void’ areas and also on top of the structure. But fundamentally soft plays need to be kept clean.

One way of making sure that the structure is at least germ-free is to use a process called fogging that we do on at least a monthly basis and more when needed. In January 2020 for example we have fogged the centre twice. This process uses a fine mist to make sure that every single surface is fully disinfected and is the same process as used in the NHS for deep cleans of large areas.

Let us also be clear that this is not an article aimed at other soft plays that might not follow the standards to their fullest extent. Instead it is a observation about the lack of regulation by government in an industry that is responsible for the health & safety of children whilst playing in their centres. All we can do at Ocean Adventurers is ensure that we are one of the centres that adheres to BSEN 1176:2008 and also lead the way in keeping the centre clean and germ-free through innovative processes such as fogging.